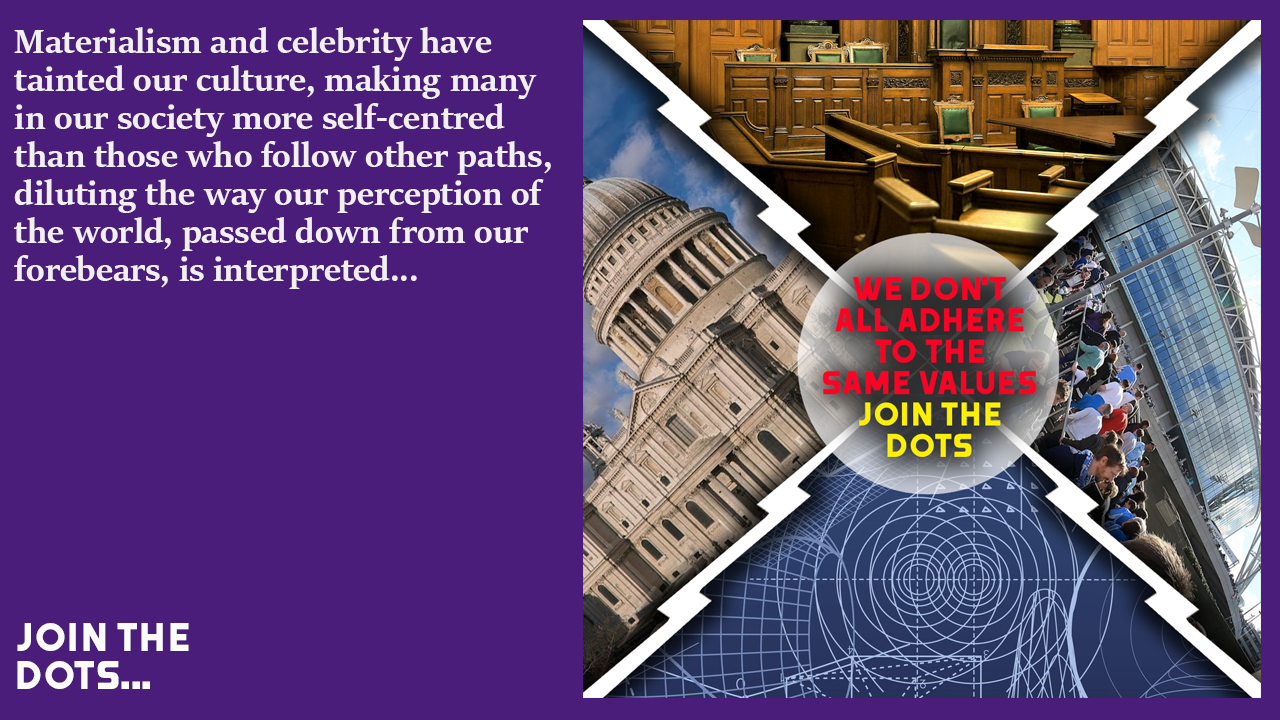 As far as I understand it today, my take on the world is shaped by three factors… my own inquisitive nature, my 30-year career as a journalist and the core values of the culture I was born into and others I have experienced.
That set of factors determines how I perceive the world around me.
The culture that I was born into is a Western Christian culture, built on the 10 commandments that teach us to believe in one God, make no other idols and to not take the name of the Lord our God in vain.
We are instructed to keep the Sabbath day holy, honour our fathers and mothers, and to not murder or commit adultery.
And finally we are told not to steal or bear false witness against our neighbours, and to not covet things we don’t possess that others may have.
Another part of our culture comes from the laws of the society in which we live. In the Western world they are largely that the age of consent is 16, that the right to vote comes at the age of 18 or 21 and that we pick up our pensions sometime after our 60th birthdays.
There’s a whole set of other laws in place that provide the cornerstone of how each country rules our lives, but the tenets are basically the same across each nation.
The way we judge others is therefore based on our own individual perception of these factors, but as “Christians” we all view the world according to those common beliefs.
The present Covid-19 pandemic illustrates that in times of difficulty we are a caring society, willing to help others in times of need and to appreciate those who work selflessly towards the common good. But at the same time we recognise that not everyone in our society behaves in that way, that some are more self-centred than others and obey the rules set by society to different degrees.
These form our core values, but not all cultures are the same. Many have far different beliefs, a totally diverse set of laws and are made up of people “wired” in very contrasting ways as a result of those discrepancies.
A website called The Register lists the main world religions and the number of people who practise them as: Christianity (2.1 billion), Islam (1.3 billion), Non-religious (1.1 billion), Hinduism (900 million), Traditional Chinese (394 million), Buddhism (376 million), Primal-Indigenous (300 million), Traditional African-Diasporic (100 million), Sikhism (23 million), Juche (19 million), Spiritism (15 million), Judaism (14 million), Bahai (7 million), Jainism (4.2 million), Shinto (4 million), Cao Dai (4 million), Zoroastrianism (2.6 million), Tenrikyo (2 million), Neo-Paganism (1 million), and Unitarian-Universalism (800,000).
To understand what is going on in the world we can’t judge by our own Christian values alone, we have to open our minds to the fact other cultures have far different beliefs and agendas that seem ridiculous to us.
Take the age of consent, the number of wives a man may have, methods of punishment, female genital mutilation and occult worship… and you get a picture of how narrow our interpretation of the world is. We may believe our values are the right ones, but other cultures might take some convincing.
Many of those religions listed above, and the roots within them, date back far further than the birth of our Christ and the rules that govern them are practised in hugely different ways than our own. I’m not well read on such matters, but in the last three weeks I’ve begun a journey of discovery to get to the heart of the chaos sweeping the world in the name of “Covid-19”.
That quest for answers has taken me into the realms of Kabbalah, Zoroastrianism, Primal-Indigenous, Islam, Judaism, Jainism, Gnosticism, Valentinianism, Martinism, Luciferianism and a host more that were an enigma to me a fortnight ago.
Within our world these belief systems are followed… be sure of that. But it matters not what we all believe, what matters right now is what the people calling the shots in the world believe… which may be a lot stranger than we can perceive from our Agnostic-Christian perspective.
Materialism and celebrity have tainted our culture, making many in our society more self-centred than those who follow other paths, diluting the way our perception of the world, passed down from our forebears, is interpreted. In other religions the lineage from one generation to the next is far more sacred and the adherence to such beliefs far stronger, something which we often fail to understand.
I’d say that my individual wiring makes me more inquisitive than a large number of people in our society, that I subscribe to our Christian values but do not believe in God and although I question the validity of all laws set by our government, I try to abide by them as best I can.
I’m no great engineer, nor radical innovator. My voice is not that of an angel and performing in front of a crowd is my worst nightmare. I’m a solitary chap who likes watching the world go by… but if I had to pick one “superpower” that I might possess it’s the ability to see the wood through the trees, to spot deceit more rapidly than most; and call the culprits to task.
Ladies and gentlemen, we are being hoodwinked on a most despicable scale! Realise it, accept it… because by Christ unless we all stand together there’s not a lot we can do about it!
Start With Bob Dylan: Murder Most Foul
A Hellish Motel And An Academy For Morticians
The Biography Of Wolfman Jack
A Paradise In The Caribbean
Jeffrey Epstein: A Daily Mail Exclusive
Military World Games In Wuhan Last October
A Simulation Of Pandemic Awareness
Is The Truth Stranger Than Fiction?