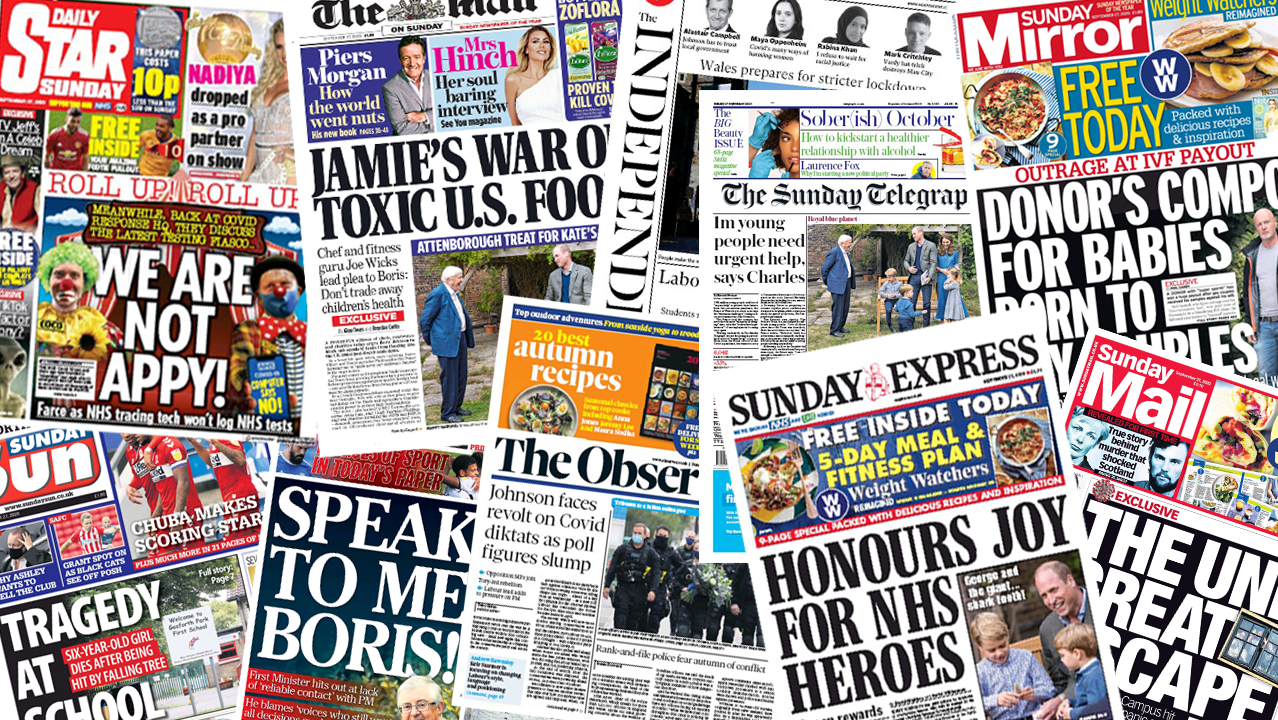 On Saturday, 26 September, an estimated 40,000 people descended upon London’s Trafalgar Square to protest against the draconian Covid19 measures being introduced across the United Kingdom in response to an “epidemic” that has so far been attributed to the deaths of about six in every 10,000 people in Britain.

Based on a sharp rise in the number of “cases” of a “virus” that appears to affect only the most vulnerable in society, who also exhibit other serious medical conditions, and with just 0.06 per cent of the population being fatally affected by it according to current figures, the respective UK authorities want everyone wearing masks and are now advocating local lockdowns across the nation.

But many in our society believe it all to be a phoney-baloney “plandemic” staged by a cabal of industrial-military tyrants hell-bent on subjugating the masses for their own nefarious ends. The protesters in Trafalgar Square were exercising their rights to freedom of speech in the face of intense propaganda in the mainstream media, but the gathering was shut down by police before internationally-recognised German doctor Heiko Schoening could speak.

Schoening was representing a group of medical professionals from all over the world who call themselves “Doctors For The Truth”. It is their belief that Covid19 is a false pandemic created for political purposes. Other speakers included David Icke, Gareth Icke and former Dragons’ Den panellist Rachel Elnaugh.

It was quite possibly the biggest protest gathering that has taken place in the United Kingdom since the government began its attempts to contain what many of those in Trafalgar Square on Saturday believe is a bogus pandemic, but surprisingly all the mainstream newspapers in the UK missed the story completely, or none considered it to be a story newsworthy of their front pages.

Having worked in journalism for the past 30 years, I believe this to be a totally unprecedented scenario.

Let’s begin with the Mail on Sunday, one of Britain’s most widely read weekend papers. It led with chef Jamie Oliver urging the UK government to block sub-standard food imports from the United States.

Now as laudable as these efforts are, it is a subject that has been flying around since the outset of Brexit talks light years ago, so is it really more newsworthy than 40,000 people protesting in Trafalgar Square?

The Mail also had a lovely little picture of Sir David Attenborough arriving at Kensington Palace with a “treat for Kate’s cuties”… hardly a picture to top tens of thousands of people marching in London.

It also had plugs for another book from Piers Morgan, a free bottle of a “Covid-killing” disinfectant, and it’s own magazine. Nothing at all on its front page about 40,000 people protesting in Trafalgar Square!

The Sunday Express went with “honours joy for NHS heroes”… a story about a bumper honours list from the Queen to praise the nation’s medical personnel who have been put under incredible pressure during these troubled times.

OK, it’s a very nice thing for Her Majesty to do, although pay rises would probably be more widely appreciated, but does it really trump 40,000 people marching in protest over government policy?

The picture in the Express also had the royals in it, this time headlined “George and the giant shark’s tooth”. Boy, Sir David’s new film getting lots of licks from the editors. The plug in the Express: a five-day meal fitness plan inside.

And so to The Observer, which led with Boris Johnson facing a revolt on “Covid diktats as poll figures slump”. I’d suggest that 40,000 people protesting government policy slightly overshadowed a possible ministerial revolt against the prime minister? What do you think?

The picture saw police officers paying tribute to a fallen colleague on National Police Memorial Day, arguably the most newsworthy story on any of the papers I’ve examined so far. There was also a down-page article on rank-and-file police fearing an “autumn of conflict”… but funnily enough it mentions nothing about a protest taking place in the nation’s capital the previous day. The plug at the top: 20 best autumn recipes and Clive James’ merits as a father.

Do you see a trend developing? With 40,000 people protesting in Trafalgar Square… the story just gets completely ignored by the mainstream press.

Need I go on? Well, briefly I will! Next up it’s The Sunday Telegraph. A lead on Prince Charles urging immediate help for young people, museums being told to stop pulling down statues and Johnson’s pick for a vacant Ofcom spot… oh, and another picture of Sir David and the dinosaur at Kensington Palace. Nothing in the plugs about Trafalgar Square either.

Then we have the Sunday Mirror. It leads on a compensation payout for an IVF “donor” for a gay couple, with a plug for some more exciting recipes.

The Independent leads on the Welsh government’s tightening lockdown measures and the Labour Party calling for delays to the university term… after students across the UK have already been hit by “temporary” lockdowns. No plugs about 40,000 people marching in London.

It’s something I’ve never witnessed as a journalist before… arguably the biggest news story of the day completely ignored by all the mainstream newspapers, it’s absolutely unprecedented. Now, why they’d all choose to do that I can’t say, but I reckon most people reading this will know what I’m thinking!