If you missed Mikki Willis’ documentary Plandemic: Indoctornation when it streamed on London Real’s Digital Freedom Platform yesterday you can tune into it here.

It really is an eye-opener about the Covid conspiracy taking place globally in 2020. I can say that with confidence because it clearly lays out the case I’ve been making on my Vocal.Media presence since March this year, research I have done independently without any knowledge of Willis’ investigations.

If you simply take the time to do the research all the information contained in Willis’ documentary is on the web… but you won’t find it on a Google search. To find out the truth it helps to make use of more independent browsers… which, surprisingly, you can still find through a Google search. Then all you have to do is Join The Dots and this #phoneybaloney being foisted on us by the puppet masters calling the shots in the world becomes patently obvious.

London Real CEO Brian Rose was not wrong when he described it as possibly “the most important documentary you will ever see” and if I include a link to it on my Facebook presence at Not.Wildaboutit it will probably be removed within a few hours… not by me, but by Facebook.

Yesterday when I tried to put up links to the Digital Freedom Platform they were removed or tampered with within minutes as Facebook did its bit in the conspiracy to prevent the truth from being exposed.

Created by the team behind the game-changing Plandemic video segment featuring Dr Judy Mikovits that went viral and was banned on every major social media platform earlier this year for exposing the truth about Covid-19, the Plandemic: Indoctornation documentary has been dubbed by Rose as “the most revelatory film on what is driving the vaccine agenda, the various roles of the WHO, Bill Gates, Tedros Adhanom, Anthony Fauci and more”.

If it wasn’t for London Real this information would remain dotted across the web on independent sites like my own, presences that also face censorship on Google, Facebook, Twitter and Instagram and don’t have the resources of London Real to get the message out.

If you take the trouble to open your eyes to what’s going on all around you it is absolutely clear this coronavirus crisis is all part of an agenda to bring a new order to the world… one where our freedoms will be greatly limited, where vaccines and sterilization will become mandatory, where our every movement will be watched and where justice will no longer exist.

This scenario is getting closer every day and while people ignorantly continue to acquiesce to this draconian bullshit the opportunity to do something about it gets harder every day. Tell them to stick their masks where the sun don’t shine, tell them we don’t need decontamination suits when we venture outside and we won’t be tracked as we go about our daily routines.

We don’t need to resort to aggression or protest… all we have to do is say no. Coronavirus is not a huge threat. Worldometer lists total deaths, even including people who were shot but had tested positive, as being 786,618. The world population stands at 7,806,026,949… so the percentage of deaths from it, even at the most inflated of figures, is 0.01 per cent. That’s one person in 10,000… and for that tiny threat the world economy has been brought to its knees… for God’s sake… open your eyes, join the dots and realise… we’re being treated like idiots, it’s time to say no more! 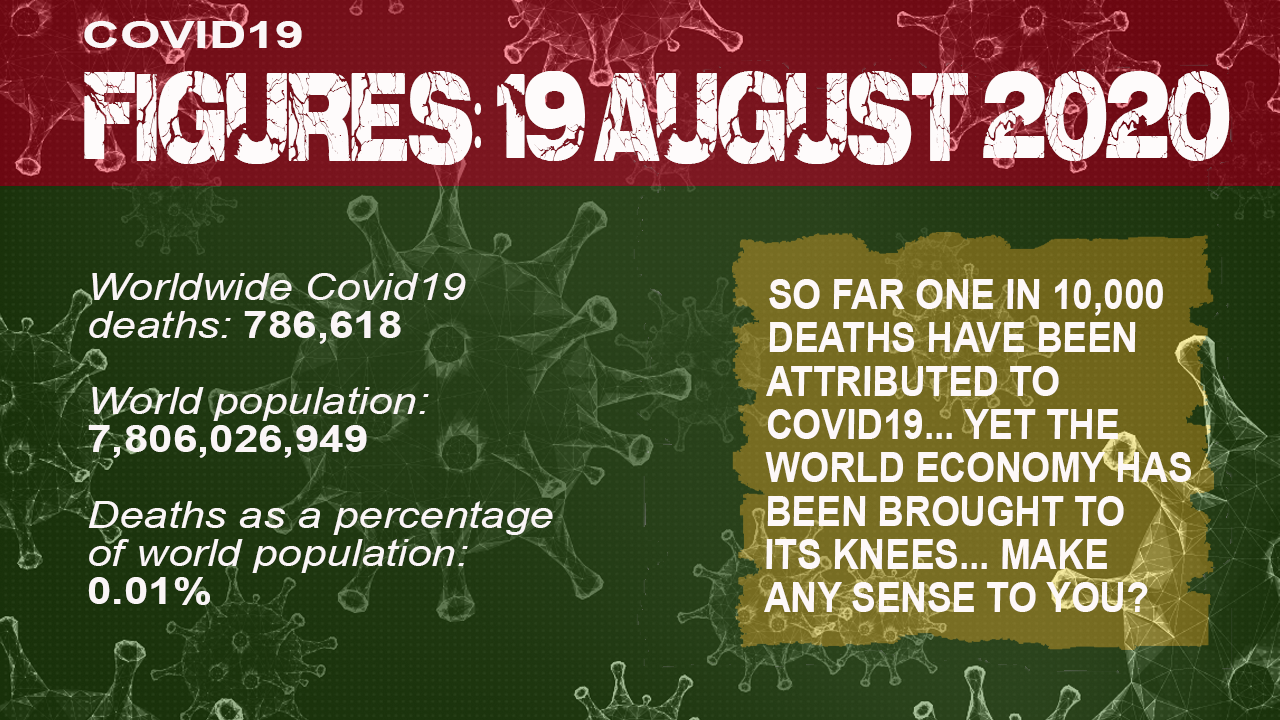